Start at the Chip shop, ride to the Pub! 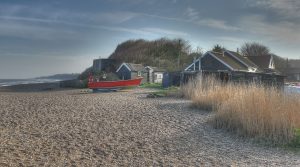 New for 2017, the first of the Thursday ‘Away Day’ rides began from the sunny seaside of Dunwich beach. A ‘just in time arrival’ by the chairman meant a slightly late start. Then a broken gear cable before we had left Dunwich effectively left our leader with three gears, however he ably rode on. Once we got going eight riders headed down the Suffolk Heritage coast to Snape malting for a coffee. We met Terry, who had  ridden over from Felixstowe. A coffee and cake later, the group headed out try and fix Martin G’s gear cable, just in time to meet Mick Pepper who had ridden over from Ipswich.

With a bit of a wind blowing, riders enjoyed the protection of the hedgerows which were showing the first buds of spring. A typical March day, bright, daffodils, breezy. We headed North now, Sweffling, Bruisyard and Badingham, to lunch at Laxfield.

The Royal Oak is at the end of the broad main street in Laxfield. The Gin as described on the slate outside may not be surpassed but the pub its self and the service from wasn’t bad either. The staff were welcoming and happy to see us and we had a large round table in the back room to ourselves. Sandwiches and baguettes, chips and salad.

The afternoon sun has some power now we are nearing the end of March and after lunch the group assembled outside the church next to the pub for a picture. Images committed to SD card we headed toward Walpole and Wenhaston for the 16 mile ride back to the beach at Dunwich . 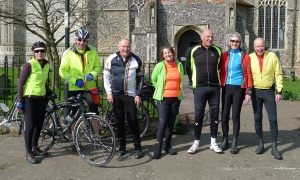 Totals for the day: