THE BROADS RIDE, led by Martin Gibson on 24th August 2017 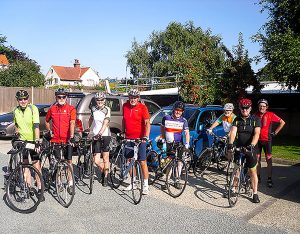 A total of 10 riders assembled in the car park in ACLE for a tour of the Norfolk Broads.

Quickly leaving the busy town roads we headed north on quiet lanes, with a glimpse of the sea at one point, to our Coffee Stop at Waxham Barn. 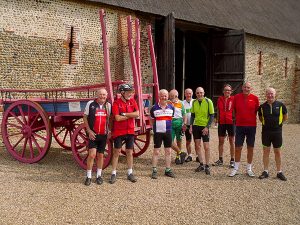 This 16th Century Barn, thought to be one of the largest barns in England ( with the roof beams from old ships timbers), was blown down in the 1987 gales & abandoned.

The vertical slots in the walls were not for use by defending ‘Archers’ but for allowing ventilation & light.

The outbuildings have been converted to a pleasant café & outdoor activities centre.

Leaving Waxham we headed West via the Norfolk Lanes to our Lunch Stop at ‘Charlottes Cafe’ in Stalham. We were warmly welcomed by the proprietor & seated in an outside Courtyard area.

We all tucked in to a variety of baguettes & light snacks which were of high quality & reasonably priced.

It was soon time to head back South, but being ‘The Broads’ a large river blocked our path. 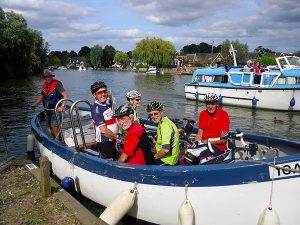 Martin has foreseen this problem & had laid on a small ferry crossing. So, five at a time our, bikes & riders were hauled on-board for the short crossing, the ferryman expertly avoiding the large hire boats that were speeding past.

We continued south & after a pleasant tea stop at South Walsham, we returned to our vehicles in Acle for the journey home.

I think we all enjoyed the ‘relatively flat’ ride through the Norfolk Lanes & many thanks are due to Martin & Janice for organising such a pleasant ride.