We didn’t have the best of starts to today’s “away” ride from Nacton. Having been held up on the A14 due to an accident (again!) on The Orwell Bridge, I arrived at Bridge Wood car park at 09:15 and was the first one there. I had phoned our leader, Ray, to learn that he was a mile or so behind me on the road but 20 minutes in time. A few minutes later, Viv rode in fresh from her C2C (Morecambe to Bridlington) charity ride, which she completed on Tuesday. Having had  a rest day yesterday on the drive back, she was raring to go again.

Ray delayed the start to allow others caught up in the chaos on the A14, time to arrive. Disappointingly, only five of us set off at 10:00, on what turned out to be a pleasant day weather wise. Despite our late start, we arrived at our coffee stop at Felixstowe Ferry only a couple of minutes after 11:00. Then suitably rejuvenated (well almost!), we decided to have a photo shoot by the waterside before setting off on the next leg of the journey. 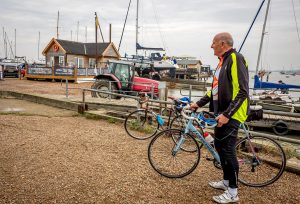 George waits for the the photo shoot that doesn’t materialize

It was then that Viv discovered she had locked her bike but had not got the key with her. Mike spent several minutes asking around for a pair of bolt croppers and eventually came up with a hacksaw. 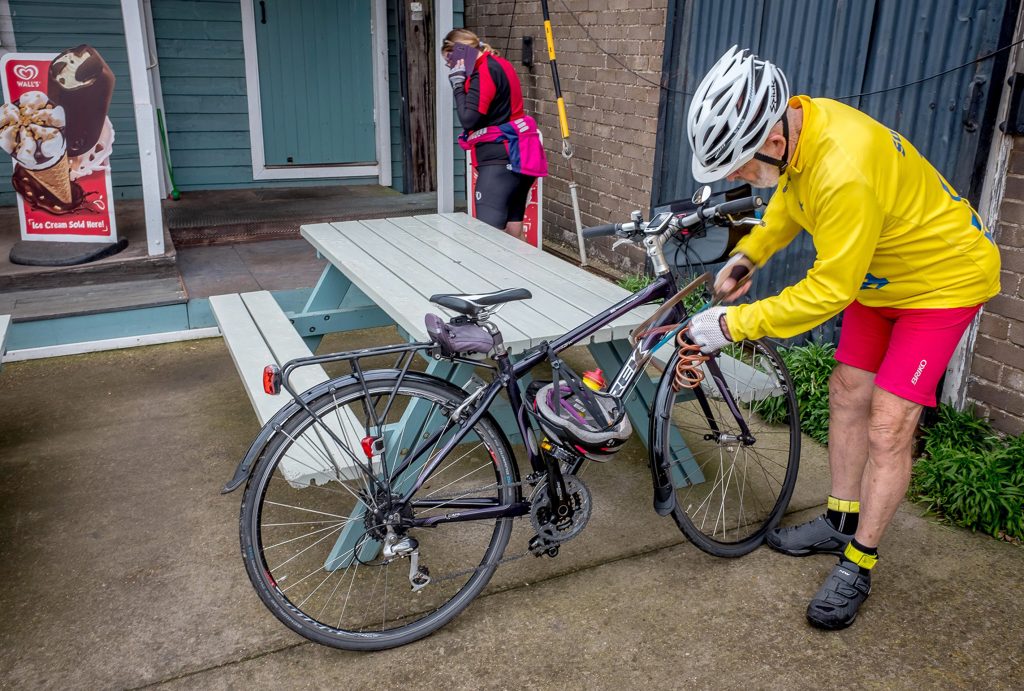 Mike hacks away at the lock, whilst Viv, in the background, phones for counselling!

Luckily it wasn’t the strongest of locks and Mike made short work of it so we were soon on our way again. The formal photo shoot would have to wait for another day. 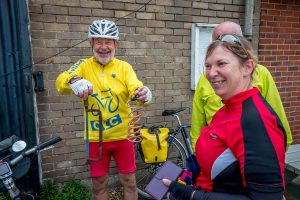 Viv has a smile on her face as Mike demonstrates his skill as a bike thief!

Ray’s rides are rarely long, but they offer plenty of leg and lung exercise through their undulations. By now the weather had brightened up a bit and the temperature was extremely mild for this time of year and the ride to lunch through the quiet lanes was most enjoyable.

Viv peeled off before we reached The Maybush at Waldringfield but we were joined for a very pleasant lunch by Paul F. Suitably refreshed, we got underway again just after 14:00 and had an uneventful run back to the start, having completed some 40 miles.

Many thanks to Ray for a well organized ride. It’s just a shame he didn’t bring a spare key for Viv’s lock!